The following are a collection of short items produce by Jim Stevenson as a result of discussions with the older members of the Village.

James Browning was a well-known character in the area before and during the First World War. He was a Publican who kept the St. George's Vaults in St. George's Place, Cheltenham and, like many a good Publican, had apparently acquired a fairly robust appreciation of his own wares. A friend of his, Jim 'Twister' Surman (an odd choice of nickname for a Bookie?) owned a pony and trap and on most week-ends they would head for Bishops Cleeve and do the rounds of as many Pubs in the area as they could. By the end of the evening they would invariably have to be helped back into the trap where they would promptly fall asleep and let the horse take them home. 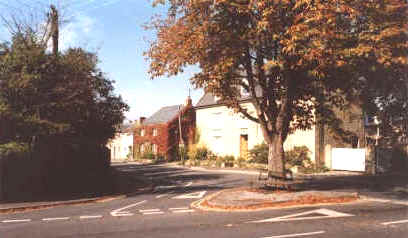 Jim Browning decided that he would like to present a tree to the village. Whether this was to celebrate a particular Birthday or Anniversary or merely an expression of gratitude to, or fondness for, the village is not clear. Whatever the reason, he duly arrived one weekend with a Horse-Chestnut sapling.

Almost the entire population of the village turned out to watch the presentation which was made with a great deal of ceremony on the then Village Green, outside the Kings Head. The actual planting took place towards the height of the celebrations, a suitably large and impressive hole had been dug and the tree was enthusiastically, if somewhat indelicately, 'Watered-In' with copious amounts of water, ale and cider; some of which was fresh, and some, it has to be said, second hand!

Shortly after the end of the First World War it was decided to erect a War Memorial and as the Village Green was such an obvious place for it; the removal of the `James Browning Tree' as it had by then become known, was accepted as a necessary, if unwelcome, task. After a great deal of discussion it was finally agreed to re-site the tree near the village pound in School Road and it was transplanted to its present position at the junction of School Road and Station Road.

By this time the sapling had become a well-established young tree and the transplantation required a great deal of spade work, both in lifting it from its existing position and in preparing the huge hole for its new site. It had obviously outgrown `Twister' Surman's pony and trap that had brought it to Bishops Cleeve and a local farmer supplied a flat bed cart with a horse that, powerful though it was, still found the short journey extremely hard going.

This time the planting took place with marginally less ceremony and considerably less alcohol. All the available village lads were prevailed upon to carry buckets of water from some of the nearby houses and literally hundreds of gallons were used to `wet it in'. Finally it was surrounded by some impressive white iron railings and its old name plate replaced on its trunk.

Today the name plate and railings have long since disappeared but the James Browning Tree continues to supply lavish quantities of conkers (or 'Obbly Onkers') for the youngsters of the village.

Most people, especially those who have served in the armed forces will be familiar with the `standard' nicknames which commonly attach to surnames, `Dusty' Miller, `Chalky' White, `Smudger' Smith etc, but oddball nicknames seem to have proliferated in this area and guessing the possible origins of them can be fascinating. Some obviously relate to physical attributes or skills, others to the owner's trade or profession while others seem, at a distance, to defy any logic whatsoever. `Doughy' Edginton was an obvious enough choice of name for a Baker and even though `Twister' may seem a rather slanderous soubriquet for a Bookie it appears that Jim Surman was not noticeably offended by it. Henry Paish was a Barber and Cobbler (formally recorded as a `Boot Repairer' in Trade Guides as early as 1906) who lived and worked in a cottage adjacent to where the `Egremont' building now stands. His nickname of `Bent axle' derived from an unfortunate leg deformity. George Haines, a carrier, was a familiar sight with his white horse and cart. He would deliver or fetch almost anything to and from Cheltenham for a small charge and it is possible that it was his varied cargoes that caused him to be known as `Junky'. In those days the term `Junky' certainly did not have the connotations that it does today; grass was something you walked on in the fields, pot was a saucepan and crack was an unwelcome defect usually found in a wall or ceiling! A number of other names which can exercise the imagination are: `Rapid' Baylis; `Pudding' Hughes; `Steamer' Davies; `Blenheim' Oldacre; `Pincher' Aldridge; `Pigeon' Gilder ; `Busy' Gilder; `Lolly' Larner; `Donkey' Redman; `King' East; `Goggy' Jones; `Never' Stephens; and `Guzzy' Gilder. Finally, one which presents no mystery but which epitomises the good natured whimsy behind so many of the soubriquets, is the delightfully named 'Tappy' Oakey.

The Osborne was a large field straddling the border between Bishops Cleeve and Woodmancote and was owned by George 'Pincher' Aldridge. The field was effectively bisected by the railway line in 1905 (when the bridge over Station Road was also built). It was that same year that Pincher decided to have his house built and he commissioned Arthur Yiend (pronounced Yend) a builder who lived on Cleeve Hill to do the job. No plans or drawings ever existed for Osborne House as it is still called; Arthur Yiend drew in the dusty ground with the ferrule of his umbrella and said, "This is what it will look like". "OK", said Pincher, "Build it like that!" Every piece of stone that was used in the building was brought down from Cleeve Hill by Pincher in his horse and cart. (It is interesting to note that in 1902 there were fourteen quarries in use on Cleeve Hill.) The house stands close to the road because, despite protestations from Arthur Yiend, Pincher refused to destroy an apple tree that stood immediately behind the house.